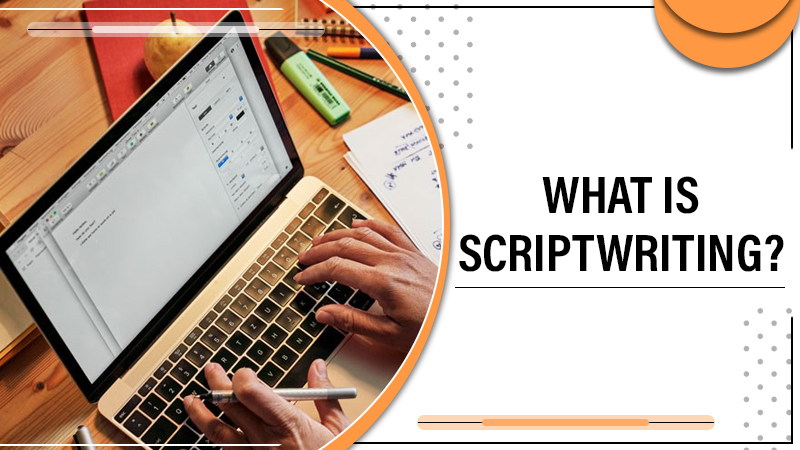 Are you a content writer or a college student who wants to entertain a screenplay? But you don’t know what is script writing? No problem. Now, you are here; we will guide you from scratch.

Composing a script can be a tedious task if you jump to the writing section. Therefore, start by understanding the types of script writing requirements.

Hence, in this guide, we will discuss the fundamentals of screenwriting, its types, and its usage. So if you are ready, let’s dive into the details.

What Is Script Writing?

Script writing, exchangeably used with screenwriting, is the art of creating scripts for mass media such as theatres, feature films, documentaries, television productions (news, shows, and ads), or video games.

How Is Screenwriting Different From Other Writing Formats?

Writing scripts is different from writing essays, research papers, and other formats. It is not even similar, to writing a novel. Wonder, how?

A novel is an imaginary presentation of a story where each scene is described enough to imagine the reader. Contrary to this, script writing is written with the objective of visual representation. Everythings written on a script is not about dialogue but has to be presented visually. Hence, the screenplay is a combination of dialogue and visuals.

Further, if you are planning to pursue screenwriting as a career, you should know its types.

Read Also: what is SEO writing

What Are The Types Of Script Writing?

To understand what is script writing, you should have an idea of its types first.

You must have watched films, web series, short films, animated tv series, or have played video games. But have you noticed the difference among their scripts?

Let’s understand the types of script writing in brief.

Writing scripts for a featured film or movie is a part of screenplays. It can be created either by a writer or a team of writers. Once the first draft of the script is created, it can be edited or modified later based on the requirement.

Most of its parts are either fiction or tell a story. It includes various information such as dialogues, camera, setting, instructions, and instructions for editing. If you’re a newbie, you should not expect the exact script to be played. In other respect, the script is tweaked on the spot or by the director, producer, and actors.

Television series or daily soaps are very similar to writing featured films. This is also called a live-action series. It can be serial or episodic. Though, the length and time for daily soaps in total is more than films. Half-an-hour video for five days for several months, that’s how it works.

Further, each minute detail is shown in a detailed manner like the place of action, their style, costumes and accessories, makeup, and others.

Since the period is at least six months or more, the script can have several plots and twists. Further, it is not written by an individual writer, but a team of writers working in collaboration. You may design your plot, subplots, dialogues, new characters, but sometimes assign someone else’s script.

Short films/documentaries/videos are small production teamwork. Hence this type of script writing is usually done by an individual writer. Here the writer may wear many hats by acting as the producer, director, or actor.

Short films and video content are produced in terms of documentaries, narrative fiction, or biography style. The time for these videos is comparatively shorter than for firms; hence it varies from 20 to 40 minutes.

Similar to tv series, animated tv series can also be episodic. The real actors work behind the scenes, and their animated aversion is displayed on the screen.

Along with that, the length for an episode of 30 minutes actually shows a 22 minutes program. Rest time is dedicated to tv advertisements.

Writers working for the gaming industry do not always write scripts for dialogues. Instead, they work closely with video game designers and assist them in creating plots, movements, actions, and sequences of events that support the concept of the game show. Now, let’s move to another section where we will discuss how to write a script.

Steps-By-Step Guide: How To Write A Script

Here, we will understand the steps of writing scripts in the way professional writers draft, polish, and format.

A logline is a one-line sentence that asks what your story is about. It defines the lead character’s objective. Will they succeed at achieving it?

It will form the structural spine of your entire narrative. In that order, you can also ask these questions to complete your logline

Note that you should try to summarize the whole concept in 50 or fewer words. Do not use the character’s name but use what they are (profession or situational presentation). Most importantly, do not provide any spoilers.

Think of the location dedicated to your genre. Consider time period, weather and climate conditions, story themes, and locations as explained below:

Main character: Now, the time is to career your main character of the story. Determine your character’s strengths, flows, goals, and obstacles that keep coming throughout the journey.

4. Create A Synopsis For Your Story

Done with all basic needs, now you need to create the outline or synopsis for your screenplay. Typically it should include:

5. It’s Time For Your First Draft

Here comes the real hard work. You can follow the steps to create your first draft of the story.

There is always a first time, and so you should write it out without hesitation. You can rewrite and install other ideas later. Further, include lines from the loglines that help readers to understand the story and act accordingly.

You are done writing the first draft. Now, you have to format it to look professional and in line with script writing’s basic guidelines.

You can use script writing software like WriterDuet, Final Draft, or Amazon Story writer. These tools automatically format the script.

7. Re-Read And Edit Your Screenplay

This is a crucial stage that no writer should skip. Re-read the entire script and do the following:

You can make as many revisions as you want before finalizing it.

Download a few scripts and read them thoroughly. Learn what production is looking for in terms of genre, convention, and theme.

We hope the guide has helped you understand what is script writing. It’s common to get nervous at first, but nothing comes out best in the first trial. You have to give repetitive effort and practice it.

Wrapping up, we wish you all the best! For more help and suggestions, you can connect with us. We are a script writing services company with a team of talented and experienced script writers. We offer our services in all parts of the world and are available 24×7.